The increase in the level of recorded burglaries in many areas of the Ireland is alarming to say the least. Nationwide data also reveal that on the average, a burglary is being committed every 15 minutes. Surprisingly, around 70% of burglaries occurred in broad daylight, in hours when house occupants are commonly at work or in school.

The statistics are disconcerting and rightfully causes insecurity among people, especially those living in burglary-prone locations. As a result, the installation of reliable home alarm systems Dublin is becoming a paramount consideration among homeowners.

No well-conceived real property investment ignores the need to establish a sound security system to protect a residence’s inhabitants and their properties. In addition, all indications show that consumer demand security for different security alarm systems is not a fad but an emerging necessity in urbanised areas around the world.

Security is necessary to have peace of mind

In terms of efficiency, one particular study show that home alarm systems significantly help in the prevention of crimes as well as in the subsequent arrest of suspected burglars.

The study specifically shows that residences where monitored security systems are installed reduce their risk of being victimised by burglars by as much as three times compared to houses where no security alarm systems are deployed.

Equally important is the role played by reliable home alarm systems in allaying the fears of homeowners and giving them peace of mind.

When homeowners possess peace of mind and are reassured about the security in their houses, they can shift focus to other pursuits and activities that greatly matter to them.

While having reliable home alarm systems provide a solid boost to homeowner’s sense of security, the grim fact remains that even houses with security alarm systems get burglarised.

This is because it takes professional burglars just a few minutes to break into a house, steal valuables, and escape unscathed. By the time law enforcement units arrive, the burglar has likely gone far away to safety. This is why consistently practicing preventive measures and keeping your alarm repaired is also an important aspect of residential security.

These preventive security measures include setting aside a secure and relatively inaccessible place in the house for storing valuables. Another is to clear the residential property of unnecessary structures that can be used as hiding places or reconnaissance points by burglars and intruders. Having guard dogs whenever possible is also a proven deterrent against illegal entry.

Hiding keys under the doormat or above the door post is passé and quite dangerous. Burglars are adept at finding hidden keys and hiding keys in places where everybody else is hiding them is a sure ticket to disaster.

Lastly, leaving doors and windows open when no one is in the house is a direct invitation asking burglars to go in and get the goodies.

Even when someone is around, it is a good practice to securely lock doors and windows in unoccupied rooms and other sections of the house.

Get a Quote in 60 Seconds 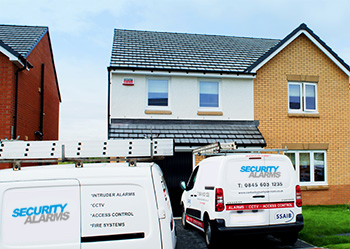